Even with prize money down this year, much more than in other territories such as France which is a discussion for another day, this field is still challenging for a massive £250,000 with £140K going to the winner.

It goes without saying that this is a hard field to whittle down, but in truth as the years have gone by the top trainers have truly learned how to prepare their horses superbly for this and so there aren’t so many huge surprises.

With that in mind, these six we feel are the ones to concentrate on. 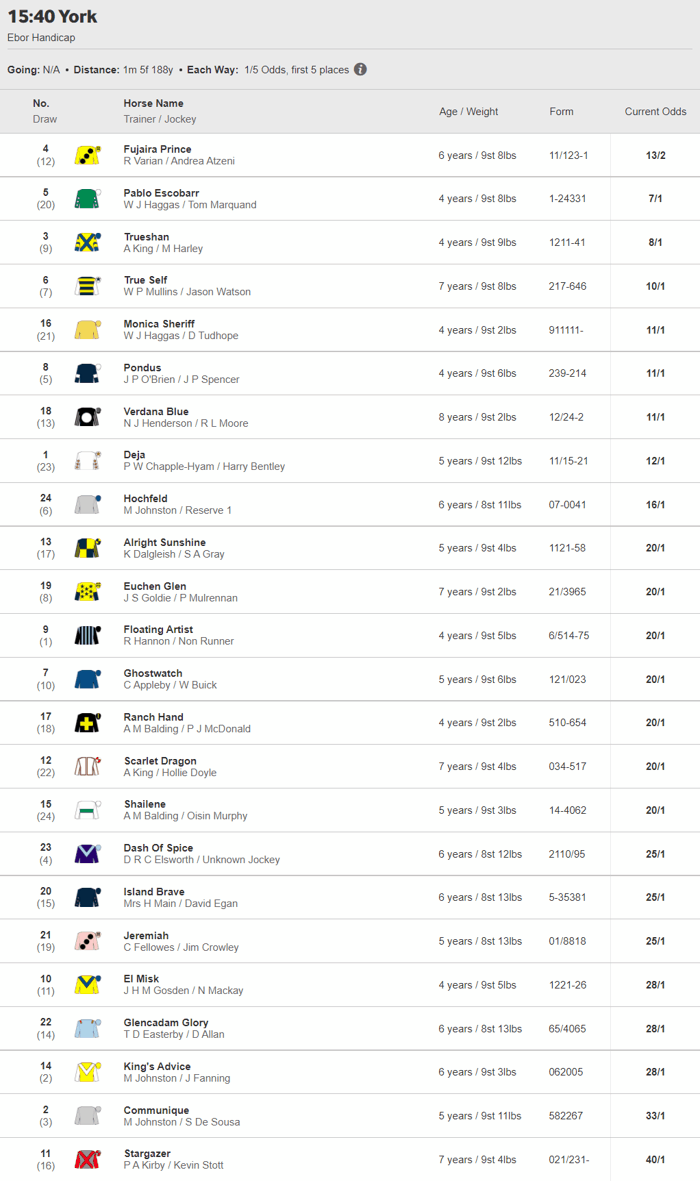 The ante-post favourite, Roger Varian’s six-year-old made the perfect return to action at Royal Ascot, for this column no less, when easily scoring in the 1m6f Copper Horse Handicap.

He looked a class act that day, though the subsequent form of those in behind means the performance may not have been quite as strong as it looked visually and so his rise of 9lbs could yet prove hard to cope with.  Andrea Atzeni rides from stall 12.

We’ve been so adamant that this horse has a huge race in him, and sentiment would make us opt for him.  From a professional point of view however we can’t rely on that of course, though his recent form does entitle him to hold a strong each-way chance.

After a 20-month break he ran a shocker at Newmarket in June, forcing many to think his days were over.  However, he ran a stormer next time out on the July Course and was only just pipped, the run giving trainer Charlie Appleby the confidence to send him to France for a Pattern race.

Although beaten in Deauville, the slow pace in his Listed race and the 1m7f trip were not to his liking and we think he will outrun his mark of 106 here under William Buick.

A last time out winner for William Haggas and Tom Marquand at Glorious Goodwood, Pablo Escobarr is just a four-year-old having his first run over this trip and so many would expect a ton of improvement to be on the cards.

The flip side to that coin is that this is his 15th run, so we do know what he’s about, and on the balance of his form it seems he has saved his best performances for when there has been genuinely quick racing ground which he may not get at York.  Stall 20 may not be so bad over this trip, but it is not a positive either.

There is a danger that because this horse is trained by Willie Mullins, he may well be over bet.  It’s true that the seven-year-old may have more to give and of course he ran well in this race last year, finishing a three-length sixth to Mustajeer, but he may not be as well handicapped as some.

He is 2lbs lower now than twelve months ago, but his form is arguably poorer this time around going into the event.

Truly a horse on the up, Alan King’s four-year-old has had just eight career starts and has registered 5 wins.

Improving to reach a mark of 109 last season, though he was a few pounds better than that in truth in our view, he had a pipe-opener this season before beating Alignak in a Listed event with a performance that once again should have seen him given a mark of around 112, though in fact his 109 remains.

On top of that apparent anomaly, it is almost certain that with no bad luck in running the gelding is bound to improve again giving him the look of a very well handicapped horse who should appreciate this trip.

The combination of Nicky Henderson and Ryan Moore on the flat always looks a particularly potent one, and indeed Verdana Blue’s two turf runs on the level so far entitle her to hold a cracking chance.

In terms of bare form she is a good each-way play, what we don’t know however is whether the drop down in trip will suit as expected or whether she’ll be taken off her feet early on.

If Verdana Blue handles the occasion over 1m6f then she must have an outstanding chance, while Ghostwatch is more than capable of landing a big handicap off this sort of mark and is feared.

The best handicapped horse in the race for us however is TRUESHAN and with conditions largely to suit, he gets the nod.