Newcastle has been at the heart of racing’s restart this season and having staged rearranged runnings of the Pavilion Stakes and the Sagaro, now gets to show off its own regular summer jewel in the shape of the Northumberland Plate.  Here is our whittled down dirty dozen: 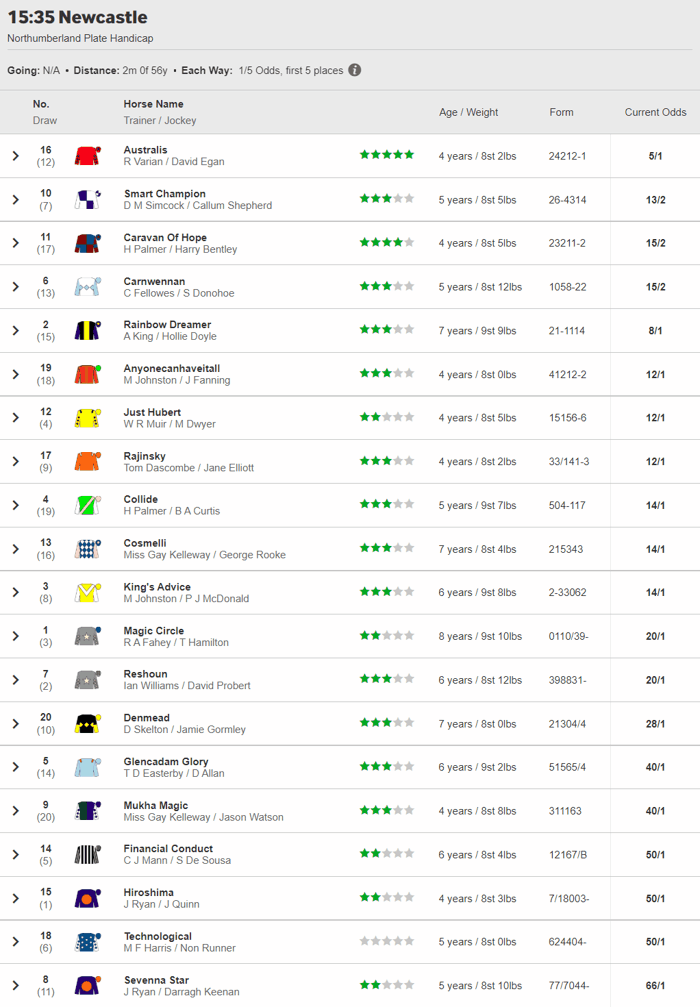 Roger Varian’s four-year-old gelding is by Australia and has been strongly touted for this race since keeping on well to beat Caravan Of Hope at Wolverhampton on June 9th over 1m6f.

The extra two furlongs is seen as a positive here and he’s certainly one who’s in the right hands given the form of the Varian yard.  The only real concern about the overnight favourite is whether or not the 5lb rise he’s taken in the handicap is too much considering the extra quality on show in this race.

We’d have to agree that the Australis form is very strong, but if he’s 5/1 favourite having gone up 5lbs then you’d have to wonder why this horse isn’t fancied more.

Like his rival he is an improving four-year-old who wants this distance, he handles the Tapeta surface and he was beaten only narrowly last time despite losing a shoe.  There is a 1lb pull with Australis in favour of Hugo Palmer’s runner this time and he may well be improving as fast, if not faster, than his main rival.

Winner of the consolation race on this card last year and a good second again over the course and distance in February, Carnwennan’s credentials are obviously strong.  He was improving faster back then and he is now 9lbs higher in the handicap too.

A dual winner over the winter over 1m4f and 1m6f including in Listed company, Collide is still relatively lightly raced and seems sure to pull out even more in this environment.  He is not handicapped to his best yet and is fighting fit after a win at Chelmsford and a good run at Royal Ascot, so has to be considered.

Alan King knows how to get the best out of these stayers and Rainbow Dreamer should be staying on at the death, though he already had a run over this course and distance in the rearranged Sagaro Stakes where he ran well but was put up another couple of pounds in the weights.

Not out of this at a nice price, Tom Dascombe’s runner is another to have won at Wolverhampton on the Tapeta over 1m6f and should relish the race conditions here.  He is improving overall, though arguably not quite fast enough to have the requisite weight in hand.

There are a few links here and they probably leave Hugo Palmer feeling confident.  There is nothing in the two profiles of Wolverhampton 1-2 Australis and CARAVAN OF HOPE to suggest that the latter can’t turn the tables now and so he is the vote.

Palmer also trains Collide of course who is another with a strong each-way chance, so any money for the selection would point towards major confidence in the yard.